Closing a week of posts about the launch of the Alliance of Independent Authors at London Book Fair, this (long) post offers: 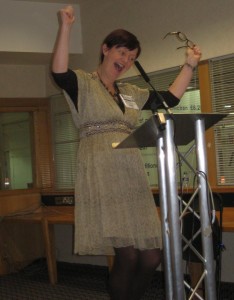 [That's me in the photo on the right, getting a tad over-excited on the day. With thanks to Catriona Troth for the picture, which sums up the mood that was in the room at London Book Fair: delight that successful indie self-publishing is now so accessible for writers. And that writers are finally taking our rightful place in the driving seat of the publishing industry.]

1. Self-Publishing and The Publishing Industry Now

2. Best Quotes from The Launch of ALLIA

3. Best Links about the ALLIA Launch

DAN HOLLOWAY:
I have been saddened rather than heartened by much that has happened in self-publishing since the launch of the Kindle. Self-publishing is now (and fair play to everyone concerned) a place where people can set out their stall and hope, with a following wind, marketing acuity, and great writing, to make a decent crust. Which means its landscape is much like the landscape of mainstream publishing. And the conversations self-publishing writers have are, now, about how to market, how to format, what their sales figures are. It is a conversation that is increasingly squeezing me out the way regular publishing did. Or, rather, it is a conversation that regularly threatens to subsume me the way regular publishing did, and that would be my biggest single piece of advice to a self-publisher – remember why you’re doing it and don’t be a magpie. Don’t let sales or invitations or publicity distract you – unless they were the reason for self-publishing, in which case go for it.