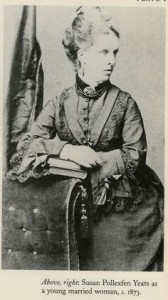 The more I circle the life and work of WB Yeats, the more I'm drawn to wondering about his mother, Susan Yeats, nee Pollexfen.

In trying to understand her influence, at first I felt hampered by how little we know about her. As I read through the letters and biographies about the glittering people who surrounded her, I got a stronger and stronger sense of her.  And came to realise that she was the poet's great unnamed tragedy.

Susan Pollexfen hailed from Sligo, in the West of Ireland, of solid middle-class, merchant Protestant stock. After a conventional upbringing, she enjoyed a brief and —  we can assume, knowing what we know of John Yeats, dazzling — courtship, marrying him not long after he was first introduced to her as her brother's friend (on 10th September 1863). Just prior to the wedding, he wrote:

… I love you so much that I would like to share every mood with you. And to have nothing secret from your quick strength and common sense — you are more a man than a woman. Only I hope you won't henpeck me. And make me withdraw from the intimacy of all people who are not acceptable to your ladyship. You are fond of the Exercise of power and authority in which I quite agree & which bodes ill to my freedom. I shall be afraid to ask anybody to the house without first asking your permission and if I do how cross you'll be with your head thrown back. Your utterance short and abrupt, your dress rustling angrily. The storeroom key grating harshly and sharply in the lock. How my spirits will sink. And how uncomfortable the unfortunate guest will be. And what a milksop I'll be thought and what a tyrant you'll be thought and how you'll be dreaded accordingly. How my poor sisters will tremble at your frown and how we shall make common cause together.

Susan and her family thought she was marrying a barrister and landowner but her husband was attracted to art and bohemia. A story of their honeymoon told years later by their daughter Lily shows how quickly their relationship deviated from his vision of amused tolerance and togetherness:

Mama had never stayed in an hotel, and Papa got ill, and she tried to light a fire and failed, and Papa got cross and said it would take a coach and four to wait on her, and then she went out for help and stood on the landing and looked down the great well to the hall, and heard some children on the top floor saying their prayers, and she felt homesick. They had a sitting room and Papa had to go to bed. She sat alone for dinner and they brought her a shoulder of mutton. She cut it once, and then, aghast at the way it opened out, looking as if she had eaten quite a pound of meat, she had not the courage to cut off even one slice, and so took just the vegetables Next day Papa sent for his mother, who came and took him to Dublin in an invalid carriage, and his illness proved to be Diphtheria!

Four years into their marriage, he took himself away from Sligo, her and their young children (they had two by then, Willie and Susan, always known as Lily) to enrol in Hatherley's Art School, London. Once set up there, he called the family to follow.

For Susan, London was exile from all she loved.  Sligo became, as home so often does for emigrants, an idealised place, her “country of the heart”. She told the children its folktales and stories and her yearning for its mountains and sea and landscape was passed on to them, and turned into poetry and paintings.

In his biography of WB Yeats, Roy Foster writes:

Sligo remained her emotional base; reticent and occasionally caustic in the Pollexfen mode, she hated what she construed as the pretensions and social frivolity of `artistic' life. Nor did she share the Yeats fascination with … people.

In 1872, she and the children returned to Sligo to live with her parents for two years — but when her husband completed his long art apprenticeship, she had to move back again to to the city and lifestyle she detested.

John never made a success of a painting career. He had talent but was a dilettante, seeming to deliberately throw away every opportunity that came his way. He never minded borrowing money, from friends, Susan's family, even in later life, from his children. They all struggled with poverty for many years.

Those struggles, emotional and financial, took their toll on Susan. Over the years, in the words of Guy Davenport, she “went quietly, pitifully, mad”.

By the time Maud Gonne came calling to the Yeats family home in Chiswick in 1889, (the scene that opens Her Secret Rose), Susan had had a stroke and was a withdrawn, morose invalid haunting the family drawing-room, or tended to upstairs.

She died in January 1900 and is buried beneath a tree in Acton Cemetery (close by where I lived for a year in 2010). 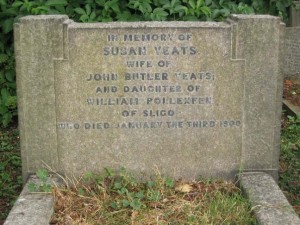 Her gravestone, looking north across the cemetery towards the chapel, is simple and announces her relationships: wife of… Mother of…

I've made her funeral the closing scene of Her Secret Rose, as I've come to believe her condition, and its possible causes, was the great unexpressed tragedy of Yeats's life — and pivotal to why his relationship with Maud Gonne took the turn it did.

After Susan's death, John Yeats wrote to his friend Rosa Butt, daughter of the famous Irish politician, Isaac: `I became engaged on two or three days acquaintance, and it was not first love or love at all, (this really entre nous — I have never confessed it to anyone) — but just destiny.'

Susan's four children erected a plaque in St John's Church in Sligo, where she'd married her charming, irascible, insouciant, wastrel husband; their father. All four were highly talented and the two boys had the creative focus that turns talent to genius. And all were profoundly affected by the tragedy of her life.

In marrying her, John Yeats said many times, he had given “a tongue to the sea-cliffs” through their son's poetry. She is never directly alluded to in those poems and the few he composed that directly address mothers or motherhood are conventional and emotionally empty compared to those he wrote for other women — friends, lovers, wife or daughter.

But the more I thought about how he must have felt, this sensitive, emotional and highly-strung boy, witnessing her slow demise into abject powerlessness, the more her absence became an ever-louder presence.

Like most Irish tragedies, the life of Susan Pollexfen Yeats expresses itself as a gaping silence, welling between the words.