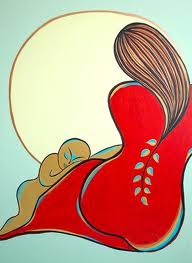 It's Mothering Sunday in the UK, the fourth Sunday in Lent. On this side of the Atlantic, the celebration arises out of a Christian tradition. This is the day each year, Laetare Sunday, when people used to  return to their “mother church”, the main church or cathedral in their area, for a special service.

To do this was to go “a-mothering” and in those days, servants would be given a day off for the occasion.

Mother's Day, the celebration honoring mothers and motherhood, originated in America and is a spring chicken in comparison.

It was first widely celebrated in 1908, when Anna Jarvis held a memorial for her mother, Ann, a pioneering woman who'd founded Mothers' Day Work Clubs in five US cities, to improve sanitary and health conditions and nurse soldiers from both sides of America's Civil War.

Anna's campaign to make “Mother's Day” a recognized holiday in the United States was successful in 1914. By the 1920s, however, she was already disappointed with its commercialisation of the celebration.

The two celebrations have now melded into one in the UK and Ireland and most people call today Mother's Day now. I prefer the title Mothering Day, because it acknowledge that mothering as an action, not just a role.

One of the most motherly people I know is my sister-in-law who has no children of her own.

It's a question of behaviour, not biology. Men, too, can mother.

The world is hard on mothers. It expects them to give 24-hour loving but offers no support. It makes a mother who works outside the home feel guilty, and one who turns mothering into her fulltime occupation feel unimportant.

Mothering stands in opposition to everything the world values: the outer life, success, ambition, money. And yet we all know, consciously or unconsciously, that mothering — birthing, loving, giving, nurturing — is the real life force, the power that sustains us all.

My most recent novel, BLUE MERCY, is an exploration of these themes, a sad story with an half-happy ending, in which a mother and daughter  pay too much attention to the men in their lives and not enough to each other.

And below is a poem I wrote a short while ago about the primal, fundamental importance of mothering to human life.

So a very happy Mothering Sunday, firstly to my own mother who lives, hale and hapy at the age of 75, in the south-east corner of Ireland.

And to every one else who has ever found themselves able to give love and care, to practice patience and forbearance, to protect, coddle or cosset another.

May we all remember to mother each other a little today — and every day.

again. Are you not mother? That
is the question that must be posed
and not just to those who
work the world with their pants
less stuffed, with their arms
held aloft when not wrapped
round the chores and the children
and, yes, round the big boys too, who sooner
or later will come home crying
about having to do what they had to do.
But yes, also Sirs, same question to you.

It’s not just the body that moulds
and anyhow the earth that births the him
and the her of it shall, in its time
— own and good — make a meal
of our segments, slurp us all up.
And, we presume, be disappeared
in her turn. Never fear. Know
that which lives as a question
shall be, is all
that can ever remain: how to birth?
And how to be born
again? And again. And