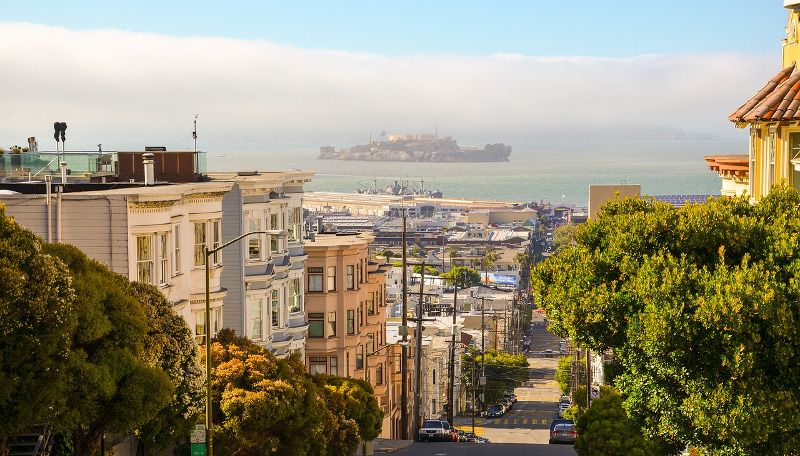 Friday fiction: Just Be Yourself is an extract from Below The Fall, the second book in the Irish trilogy. Jo has ended up in San Francisco, by way of London and hasn't been home in ten years. She has quite drinking and friends, job, lifestyle have all been transformed.  Ireland, Rory O'Donovan, and her twisted family history have never seemed further away. Now read on:

Richard and I sit at our table in Mani’s, drinking “love bombs”: alcohol-free cocktails of passion-fruit juice, wheatgerm and ginseng. We are both dry, one of the many things we have in common. This makes us mildly self-conscious — since its lawless, boomtown beginnings, San Francisco has been a hard-drinking town — but it’s just beginning to be cool to be clean. Health is a burgeoning business and sober clubs are opening up.

Over the menus, Richard is making a tale out of his complaints against Gary. On Sunday afternoon, after an argument about Richard’s staying out all night after a trip to the Glory Holes, his favourite bathhouse, Gary “flounced” out of their apartment and hasn’t been seen since. The word on the gay grapevine is that at least one of those absent nights was spent with Reno Lewis, who just happens to be an old flame of Richard’s.

“Reno Lewis,” wails Richard, dropping his face into his hands. Under the dramatics, I know his dismay is real.Real, but misplaced, it seems to me. For weeks — months — I have listened to Richard bemoaning Gary’s predilection for monogamy as if it were a vice.

“So what’s the problem?” I ask. “I thought this was what you wanted.”

“I’m not jealous. You know I don’t do jealous.”

“Come on, Squirrel, keep to your script. You’re my buddy. You’re supposed to pat my hand, tell me I’ve been wronged.”

“I can’t, you contrary old queen. For months, Gary has wanted you to be a couple and you insisted on your inalienable rights to visit the Glory Holes whenever you fancied. Now he’s playing things your way and you’re outraged.”

“Why are you doing this, Richard? You two are so great together.”

Our waiter comes over, a new guy, dark hair in a pony tail, whiter than white teeth, very young. Richard and I exchange a look that says: nice, very nice. Richard has taught me how to admire men, how to look at them frankly, without fear. It helps when they are younger, as this one is. He takes our order and departs, the strings of his apron tied into a heart shape over his butt.

Richard sees me look and nudges me. “Eyes off, Squirrel, he’s mine.”

I groan out loud; he can always tell. “Aren’t there any straight men left in this town?”

Richard laughs. I’ll get no sympathy on that score, I know. And he’s right, it is he who is in the minority, even here in San Francisco. I turn back to our conversation about Gary. “You know, Richard, you can’t have everything.”

“I don’t want everything, O Heartless One. I only want…” He stops.

He looks over his shoulder. “Is this an X-rated restaurant?”

I laugh. “Come on, Richard, be serious. What is it that you want?”

“And the other half?”

“The other half, I want what Gary and you and the rest of the goddamn world seems to think I should want: side-by-side TV dinners and hand-in-hand trips to the stores. Romance and undying love with one wonderful man.”

“So-o-o-o, all you need is to find someone who understands all that and loves you anyway. Somebody who lets you be both.”

“But, Richard, you have that. With Gary. At least, you had, if you haven’t blown it. Your problem isn’t that you want everything. It’s that while you get one thing, you’re longing for its opposite.”

He picks up his napkin, and mine, stuffs one into each ear.

“I’m right, and you know it. While you’re at home with Gary, you’re wondering what’s going on down the baths. After a few nights in the Glory Holes, you’re thinking: what am I doing here when I could be home with that great guy of mine?”

He takes the napkins down. “While I’m at the Glory Holes, honey, thinking is about the only thing I’m not doing.”

I giggle. “But I’m not altogether wrong, am I?”

“You’re just telling me back what I already told you. I’m a condemned man. This isn’t a phase: it’s the story of my life.”

He looks so miserable that I laugh. “Come on, aren’t you the guy who told me that happiness is a decision?”

“Oh, that. I was only trying to cheer you up. You and I know better than that. Come on, could you ever be happy in Mucksville? Could I, in Telport?” Richard comes from a small town in the Midwest. For him, indeed for many of the people we know, home is a four-letter word.

“But we’re not in Mucknamore or Telport any more,” I say. “We’re here, in one of the best towns in the world for people like us.” I reach across and touch his hand. “Look, Richard, I just have to say one more thing, so you can’t fool yourself that you don’t know. If Gary wasn’t scared of you leaving him, he would never have gone near this Reno Lewis. Gary is man enough to let you go prowling if that’s what you need to do, once he can trust you to come home to him after you’re done.”

Our waiter friend comes across with our food. Richard throws him such heavy looks that the poor boy breaks into a blush.

“Well, Minnesota, we’ll have to show you around a little. What time do you get off?”

“Oh, I’m sorry. Pardon me if you’ve got better plans.”

“Tell him, Squirrel. Tell him I don’t bite.”

“He doesn’t bite.” I say, flatly. The boy looks at me, then at Richard.

“Relax, Minnesota. This is a friendly town. I’ll just take you around, introduce you to a few people.”

“Okay.” He flashes his perfect smile. “Yeah…why not?”

He goes off to attend someone else. Richard is jubilant. “Take that, pal Gary,” he says, discreetly punching the air.

Coffee arrives via another waiter and I tell Richard my news. “I got a letter from Ireland today.”

“No! Not from the immovable Mom?”

“From her representative, Sister Maeve. She’s coming over here for a visit.”

“This, I deduce from the droop of your chin, is not a good thing?”

“Oh, Richard, you know what she’s like. She only wants to come here so she can have a good snoop around my life and tell me where I’m going wrong.”

“That’s what big sisters do, I guess.”

“She’s bringing Donal with her.”

His eyebrows lift into a question.

“Poor Squirrel. How long will they be here?”

“Two weeks,” I wail. “What will I do with them for fourteen whole days and nights?”

He notices my hesitation. “Unless I’m one of the things in your life that you don’t want her snooping around.”

“If she wants to be critical, you can’t stop her. Let her be critical.”

I make a face. “Come on, what if it was your mother coming to see you?”

He shudders. “That’s not too likely, praise be. She can’t come because she hasn’t told any of her cronies I live here. She’s afraid they’ll put two and two together and work out why I’m not married.” He takes my hand. “Just be yourself, Squirrel. Stand tall.”

“I can imagine what she’ll say about teaching aerobics.” I stick my nose up and imitate my sister’s voice at its pickiest: “‘I’m sure it’s fun, Jo, but it’s hardly a proper job, now is it?’”

“Let her come, let her think what she wants, then let her go home again. That’s all you have to do.”

Richard is the only person who understands why I left Mucknamore and never went back. Why I won’t get in touch with my mother or grandmother if they won’t contact me. I have told him everything. He lifts my fingers, brushes them with a kiss. “You know you’re fabulous, darling. If the Mucksville contingent can’t see that, it’s their loss.”

“You are. Too, too fabulous.” He looks over my shoulder. “But now,” he says, “it would appear that dessert is approaching.”

I follow his eyes. Our waiter is crossing to our table, white apron gone. “I got off early,” he says, sliding into the chair opposite, his skin glowing with youth and promise.

I get up, leave my half of the check on the table.

“Be nice to him, okay?” I whisper into Richard’s ear as I kiss him goodnight. “He’s sweet.”

He answers me with a horrible leer.

“Honey, you know I’m the best.” His chuckle follows me out into the foggy evening.

If you enjoyed this post, please let me know on my Facebook page or via Twitter. And… if you have some likeminded friends, I’d love for you to share it with them. Thank you!