I consider Glendalough, Co Wicklow, Ireland, to be one of the most 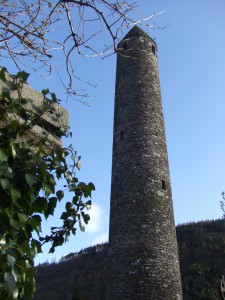 inspiring places on earth.  It's where Iseult Gonne is buried and where some chapters of But A Dream, the third book in my WB Yeats trilogy are set. I spent as much time as possible there when I lived in Ireland, especially while researching  that novel.

This poem is a tribute to all that was given to me there.

Time Out At Glendalough

After you have walked the ruins
of seven churches,
tilted back your head to seek the top
of the tower that took
the rounded point
of Kevin’s steeple
and thrust it up,
three times as high,
from earth to sky to mark
the ground you walk upon
as holy;

after you have circled green lake paths
that urge you up, then further up,
to top the crashing
waterfall, then
higher;

after you’ve been stopped and stopped again,
by sight of ice-sliced mountain cut to valley
its mesh of rivers and falls,
rushing to empty all into two, long lakes
that somehow take this ceaseless gush
and hold it
still,

you will know
the allure of here,
as of all the places we call sacred,
is the silence.

You will have heard
the voice
of your own blood
dropping into
the deep.

Become a patron today and please accept my endless appreciation for your support and encouragement … and for your love of poetry.