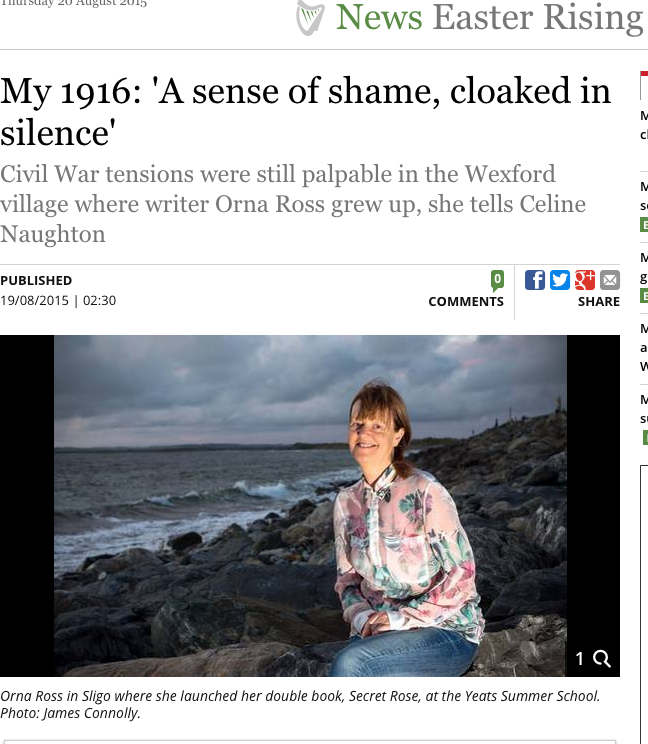 The Irish Independent caught up with me while I was at the Yeats Summer School in Sligo to talk about the Easter Rising of 1916, what it meant to WB Yeats and what it meant to me, growing up in a small Irish village in the 1960s and 70s, in the shadow of the Irish civil war of 1922/23.

Next Easter, I hope to be back in Wexford to commemorate the centenary of the 1916 Rising. For me, if we don't take this  opportunity to talk about what followed on six years later we will have, in WB Yeats's words, “disgraced ourselves again”.

The shame and fear and silence around the Civil War subject was the subject of my first novel, After The Rising. When I was growing up, our school history books jumped straight from the “glories” of 1916 and the War of Independence, to the mid-1920s. “The War of The Brothers” was literally a blank page and even more disappeared were the sisters.

It's time to go there.

This Irish Independent interview was commissioned and written, by coincidence, by the woman who gave me my very first editing job back in the 1990s, the rather fine writer and editor, Celine Naughton.

You can read the full article on the Irish Independent Website here.