My short bio is here. This page is for readers who'd like to know more. 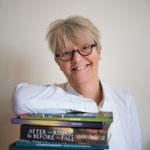 Born: Áine McCarthy, in Waterford, Ireland, in 1960. Yes, Orna Ross is a pseudonym! My first fiction publishers said Áine was “too Irish” (read: unpronounceable) and recommended I change to something short and phonetic in English.

Raised: Murrintown, Co. Wexford, to my mind then the smallest village in the world.

Birth Family: Eldest of five in a nuclear Irish family, of three brothers and one sister, a rubella child with severe disability. That helped to shape us all.

Marital Status: 30+ years, to the man known around these parts as The Hub. So far, so fair.

Children: The Daughter and The Son, now grown up and living close by. Being from a country riven by emigration, I know this for the blessing it is. They lent me their names for my pseudonym. (I knew they'd come in useful someday).

Hometown: This is a hard for me to answer. I've moved a lot in my life and call many places home.

The first was, and still is, Wexford and its surrounds. A trip from Murrintown into “town”, with its long quay, crooked Viking streets, and international opera festival always felt like a magical excursion to me. It still does. Between Wexford town and Murrintown was Johnstown Castle, a Victorian neo-gothic pile, with lakes and gardens, and nearby evocative ruins at Rathlannan, and cemetery at Kildavin. (Don't you love even the names of these places?). I spent many a formative day roaming Johnstown's grounds and deer park, reading a book and communing with swans and gravestones. Another polar point in Wexford is Rosslare, where my parents moved in 1978 and where my mother still lives. Another magical spot, captured brilliantly by John Banville in his beautiful novel about loss, grief, memory, and regret, The Sea.

Then there's London, incomparable, uncontainable London, for me the greatest city in the world, where our sons and another brother live, and corners of which I'll never be able to leave.

And now St Leonards-on-Sea, a bohemian spot near historical Hastings, which we (The Hub and I) visited for the first time in 2016, took a rental in for six months in 2017, and finally bought into in 2021. This is the first place where I have felt truly at home. (Come visit!)

Day job now: Founder-director of the non-profit Alliance of Independent Authors (ALLi) which The Hub and I run together.

Religion: I'm not religious (the convent education put paid to that!) but I have a deep faith in the creative spirit and the creative process that animates our universe. Observing and aiming to emulate it holds me just as the concept of god holds others.

Politics: Feminist progressive. I was once active in the struggle for women's rights in Ireland, when sorely needed, and I'd like to see the cage of gender further dismantled. For me, this is still the most important political struggle: the one that plays out internally for everyone, across class, color and creed.

For those of you who like to label, I'm a CIS, white woman (she/her) who loves all things transgressive and transformative, non-binary and non-hierarchical. I want to see more women—and more positive female, feminist and feminal values—in public life. I see writing as a political act, fiction and poetry included. And I want to be the change, not just write about it.

Diet: Vegetarian since 1993, when I visited an abattoir for a story I was writing about “mad cow disease”. Mostly vegan since breast cancer brought Jane Plant’s work on the links between hormone-saturated dairy and cancer to my attention. Cannot believe this has become trendy. Just love millennials and Gen Zs.

I agree with Mr Hartley that the past is another country and it’s my favorite place to travel. I’m especially drawn to bohemian times and places that throw off shackles, allowing creativity to flourish — fin de siecle (1890s) Paris; literary revival and revolutionary  (1910/20s) Ireland; hippy and gay lib (1960s/80s) San Francisco.

We're all born of woman and seeded by man and we all carry “male” and “female” characteristics and energies. How these play out, in an individual life and in different societies, is endlessly fascinating to me.

Everything I needed to know, I could have learned easier by watching the waves. I've always searched out the sea, wherever I lived, and now am blessed to live beside it again.

I'm a better human being for reading fiction and poetry. A deep bow to everyone who believes in the magic of two human imaginations connecting, in silent communion, across space and time, in search of spirit and soul.